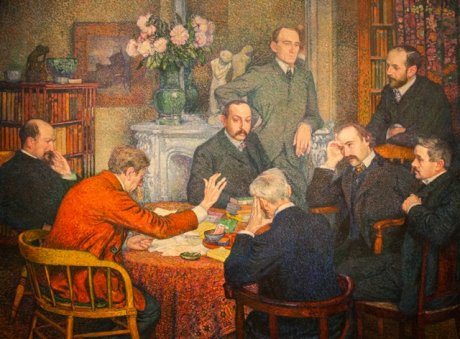 Théo Van Rysselberghe, The lecture of Emile Verhaeren, 1903
The writer, critic and the art of his time (1881-1916)
In co-operation with the Verhaeren museum in Sint-Amands at the Scheldt and the Free University of Brussels (ULB), the Museum of Fine Arts organises a grand exhibition about the Ghentian poet and art critic Emile Verhaeren, who passed away exactly one hundred years ago.
The exhibition focuses on the universal nature of Verhaeren’s works, his network within the art world around the turn of the century and the international attention for Verhaeren’s work, first of all in Belgium and France but also in Russia and other countries.
One hundred years after his death, the MSK pays homage to Emile Verhaeren (1855-1916), a key protagonist in the Belgian cultural landscape around the turn of the century. We invite you to rediscover the fin de siècle art world through the eyes of the writer who witnessed it from the front row.

Privileged witness
Emile Verhaeren was a poet and art critic who enjoyed an international reputation during his lifetime. Between 1880 and 1916, he closely followed the development of avant-garde art in Belgium. He defended naturalism and socially engaged art, Impressionism, Neo-Impressionism and Symbolism. Above all, he was a defender of modernity, which he discovered in the art of his time.
Verhaeren captured the emotions, passions and artistic controversies of the day in his poetry and writings. Over 100 years later, they allow us to rediscover the work of national and international artists through the eyes of an idiosyncratic connoisseur.
International masterpieces
The exhibition brings to life the historical and artistic context from which the poet-critic’s oeuvre emerged. As a starting point, we draw upon the museum’s own rich collection of paintings, sculptures and works on paper. Popular favourites, such as The Reading by Emile Verhaeren by Théo Van Rysselberghe and Children at their Morning Toilet by James Ensor, will be brought into dialogue with masterpieces that rarely leave the reserves
At the same time, a wide range of works from international public and private collections will travel to Ghent, including pieces by Auguste Rodin, Paul Signac, Maximilien Luce and Odilon Redon. Works by artists such as Léon Frédéric, Eugène Laermans and Constantin Meunier, Jan Toorop and Guillaume Vogels, Henry Van de Velde, Fernand Khnopff and George Minne are also not to be missed.
In total, over 200 artworks and books will be on view in the galleries.
Opening of the Drawings Cabinet
The opening of the Verhaeren exhibition coincides with the inauguration of the new Drawings Cabinet. In these eight rooms, and through changing displays, the MSK can henceforth make its multifaceted collection of works on paper accessible to the public. For this exhibition, we delve into our exceptional holdings of Ensor prints and precious books, for example, in addition to the numerous pastels, drawings and other works on paper that will be displayed on the walls.
Bruno Fornari, Johan De Smet and Cathérine Verleysen (MSK), working in collaboration with Rik Hemmerijckx (Emile Verhaeren, Sint-Amands Provincial Museum) and Paul Aron (Université Libre de Bruxelles – FNRS), lead the curatorial team.
MSK - Verhaeren Revealed - 15.10.2016-15.01.2017
Website : MSK
Website : Gent
FIC123.BE THE CULTURAL PORTAL.
Overview of the FIC123 BLOGS